Report by Mike Champion on a “taster” visit to the

Sometime ago the Virtual Jet Centre invited Graham Sykes, Chief Executive of Graham Sykes Insurance for a brief “demo” session in their flight simulator. Graham asked if I would visit on his behalf and evaluate the session to see what relevance it might have to his business. I have a passion for aviation I was an RAF pilot for twenty years and then worked in a family business.

I was initially met by the VJC Boss Captain Andy Wilkins a former airline captain and his team of instructors. They all demonstrated a very high level of enthusiasm for the project.

An ordinary looking small industrial unit was to unveil a very non-ordinary scene. A flight simulator (BOEING 737-800) a cabin (containing around 20 seats) and a suite of computers flying simulators (about 10)

After a tour of these very impressive facilities I had a go myself at take-off circuit and a simulated landing at Munich airport. Having flown many hours in flight simulators I was amazed how realistic this was The flight simulator was built by Captain Andy himself, it was superb. When, as you come into land you get an adrenalin rush you know it’s good!

The three main areas of interest are :

Many aircraft accident and incidents over the years have been caused by a breakdown in communication between Captain, first officer, cabin staff, engineers and air traffic controllers even my single seat Jet flying experience there were incidents of this nature. In the mid 80’s the airline industry very rapidly realised that ‘Human Factors’ now called ‘Crew Resource Management’ was a very important aspect of training. 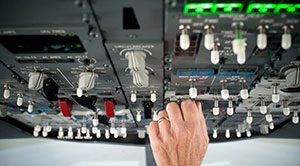 So back to the Virtual Jet Centre here they run day long courses for typically 6 – 8 people or fewer and introduce many team building experiences. For example a team of two could fly the simulator and could be assessed individually or as a team, one person could be the pilot and the other 2nd pilot responsible for undercarriage, flaps, navigation etc. Another experience might involve the cabin where emergencies could be simulated and ‘before flight’ briefings could be given in teams. There are too many team situations to be covered here. Refer to www.virtualjetcentre.co.uk where you  can get more information.

In all these activities I feel a very close and efficient team of employees would gain as much as a group of employees who are far from a team from this experience. I would not hesitate to have sent my employees on this adventure as I am sure productivity would have improved or I would offer this as a day out for a valued Client. And it’s a bit more exciting than a day at the races or a day’s cricket!

Many thanks, once again, to Captain Andy Wilkins for a quick look at a very professional and thought provoking experience.